“The longing to reach an exotic destination
is not for the food, the entertainment, or the postcards,
but a yearning of the soul to complete something
undone long ago.”

— KERRIE REDGATE
excerpt from “Is It the Body or the Mind That Travels?”,
Planet Whispers: Wisdom From Soul Travelers Around the World
(Soul Wings®Press, ed. Sophia Fairchild, 2011)

The Anthologies &
Other Publications 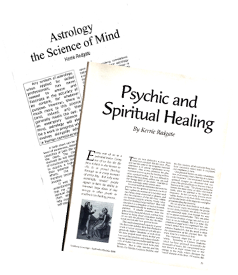 Despite my beginnings as a prolific writer from around age 6 (poems, short stories, a play at age 9, the beginnings of a novel at age 10, and later song lyrics from age 15 to 29…), I hadn’t had anything published until I produced a number of magazine articles from the late 1980s (Psychic and Spiritual Healing was actually published twice by the same magazine—Southern Crossings: Spiritual Development magazine—at their request.

I later made my first anthology contribution to Ian White’s book Australian Bush Flower Healing in 1999. Though, this was an odd experience, as my very rough first trial draft had been written quickly for basic subject approval, and so had been seriously altered (every paragraph!) by the editor (including some critical astrological spelling: I was not referring to the Kuiper Belt “trans-Neptunian” bodies, but the eight Witte-Sieggrün Transneptunian Points—vastly different!).

And that badly edited draft was also published, instead of my third and final draft which also contained corrections to the chart! (Getting asteroid names onto a chart for print in those days was a literal paperprint-scissors-stickytape-scan job!) 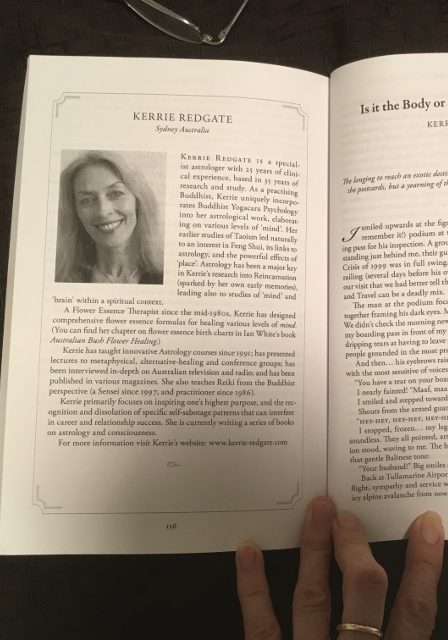 Yet, I was published again in another anthology in 2011, via the talented author/editor/multi-award-winning publisher, Sophia Fairchild of Soul Wings® Press. Sophia maintains a close working relationship with her authors, so this was a much happier experience than my first anthology contribution in 1999!

This 2011 book, Planet Whispers: Wisdom From Soul Travelers Around the World, has fourteen contributing authors, including Sophia, herself, and we received an award for the book, which is quite exciting! Also (at this time of writing), on Goodreads it’s been given an average of 4.75 stars and 100% of people voting like it.

My chapter in that book is titled “Is It the Body or the Mind That Travels?”, uncovering the subtle astrological influences that are travelling with us in foreign lands, related to the role reincarnation, as well as astrology, plays in our travels.

My Planet Whispers chapter also offers some clues as to how you can find your own personal Power Places. I gave away a little of my research in that book pertaining to the source of astrological influences, but that will be the focus of an entire book I’m currently completing.

. . . I do have to say, though, I have some issues with Amazon’s Audible narrated version of my chapter in Planet Whispers, so I recommend the paper or ebook versions if my chapter is significant for you. See the detailed note ↓ at the bottom of this page.

2011 was very much a writing year for me. I had also stepped up my blog production (which I’d started in January 2010) — now lost, thanks to Yahoo!’s shenanigans. (These days I have different web host for genuine customer service!) Though, I still have many of those original blog texts, so I may re-purpose some as a small ebook, and one genuine ‘metaphysical’ story has already been added to my forthcoming book, In 5,000 Years: A Novel Truth.

(I have since created the Exceptional Purpose Resource blog—see the Cult or Consciousness download below where you can be added to the newsletter list for the Resource blog and other alerts for my books, my courses, and my podcast.)

Also that year, I was pondering deeply as to how on Earth I could slice up my gigantic 550,000-word manuscript into a series of books.

The result is that today I have about 12 books on the go! (And another 6 in the planning stages!). I’m hoping to have three indie published at around the same time (something you can’t do with traditional publishing), so you can continue reading them as an interconnected series.

So many delays, but I’m now planning to make 2022 my publishing year! (2018 was a complete redesign of my major websites and the launch of my RedgateSpace web design service for especially my Exceptional Purpose astrology clients.)

If you are on my emailing list (see the purple ‘grab it here!’ button, below), you will be alerted to the brief periods when my books may be discounted, or pre-released especially for review purposes.

The initial ebook in the Astrology & Mind Series (You Will Reincarnate — read the blurb) will be free for a time in the digital editions and later available with a price tag for the print and audio versions (with me narrating).

There are some errors in the narration of the Audible version of my chapter in Planet Whispers. Despite my precise literary efforts to avoid confusion, the word ‘tear’ was mispronounced as though a rip rather than a little wet drop (even though that error made no sense to the plot!).

And also, more importantly, the following Bahasa Indonesia term “maaf maaf” (which I’d explained as “excuse me / I’m very sorry”) was replaced by the narrator with a defiant “Uh-huh?”, which was NOT what had happened in the actual incident!

It mortifies me to think that people hear this as me being rude to a Balinese official! I’d had a lovely exchange with that man—that was the point!

Also, I was surprised to find that there was someone on the planet, especially a narrator, who had never heard of Australia’s iconic ‘Bondi Beach’, so it came out ‘Bondee’ (again, not as I had intended!).

Interestingly, I tested the ebook version on my older, original Kindle (that I still keep as a spare), which has speakers and the auto text-reader, and I found that the Kindle’s AI voice handled both ‘tear’ and ‘Bondi’ perfectly! (Surprisingly, two points for AI !)

I haven’t heard all of my chapter narrated, so I have no idea how the narrator handled the astrological terms! You may still be able to hear the first page of my chapter recited in the audio sample on the Amazon Audible page for the book (if it starts with “I smiled upwards at the figure standing behind…”). I hadn’t been aware of an Audible version in existence before I’d found that page.

If you are interested in my chapter, my advice is to buy the paper or the ebook versions (Kindle, Apple Books, Kobo). And when I produce audio versions of my own books, I’ll be the one doing the narration!